There’s almost nothing more glorious than a big pan of stuffed tomatoes and peppers with roasted potatoes drenched in fine Greek extra virgin olive oil. My grandchildren are here from Arkansas, so I made a pan today for us to enjoy. 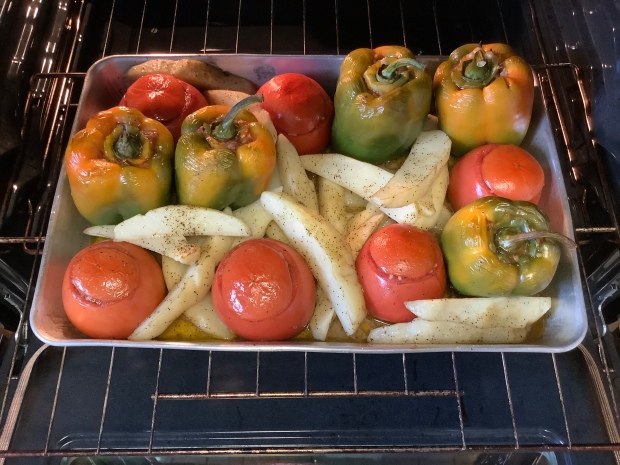 Cut off tops of tomatoes. Retain tops.Scoop insides of tomatoes and transfer insides to a large bowl. Be careful not to pierce or gouge through tomato skin.

Cut off tops of green peppers and reserve for later use. Scoop out seeds and membranes.

Heat butter in a large skillet over medium heat; cook and stir onion and garlic in the melted butter until softened, 5 to 10 minutes. Add ground chuck, seasoned salt, oregano, allspice and black pepper to onion mixture; cook until ground chuck is browned and crumbly, 5 to 10 minutes.

Mix in tomato meat, broth, 2 teaspoons of the sugar and the tomato paste into browned chuck; bring to a simmer, about 15 minutes. Add rice and bring to a boil; remove skillet from heat.

Place tops onto filled tomatoes and peppers and arrange them into the baking dish.

Peel potatoes and cut into wedges (1/6 cut). Place in bowl, drizzle with olive oil and season with Cavendars, oregano, salt and pepper. Place in baking pan around tomatoes and peppers.

Bake in the preheated oven for about 1 hour.